‘Together, we can!’ he said with a big smile on his face, concluding our conversation. [Juntos Podemos]. More than one hour we talked about how the capital of Ecuador is willing to become a sustainable city, the biggest steps the city took the last years and the once it is still lacking.

At least the city is moving forward, in 2016 Quito was voted for most sustainable city in the Hour of the Planet challenge of WWF, even only two years later after the Mayor really started working on the topic. So what about the capital of the country with the highest environmental awareness in the world?

Ants on the Hills

‘It is quiet, compared to other capitals I visited,’ I answered when the assistant of the Ministry of Environment of Quito asked me about the first impression of her city. Arriving in Quito was different than arriving in the previous capital on my trip, Bogotá. I wasn’t overwhelmed by air pollution, however I will the next days, and the chaos was by far less. No wonder since Bogotá counts four times as much inhabitants as Quito. 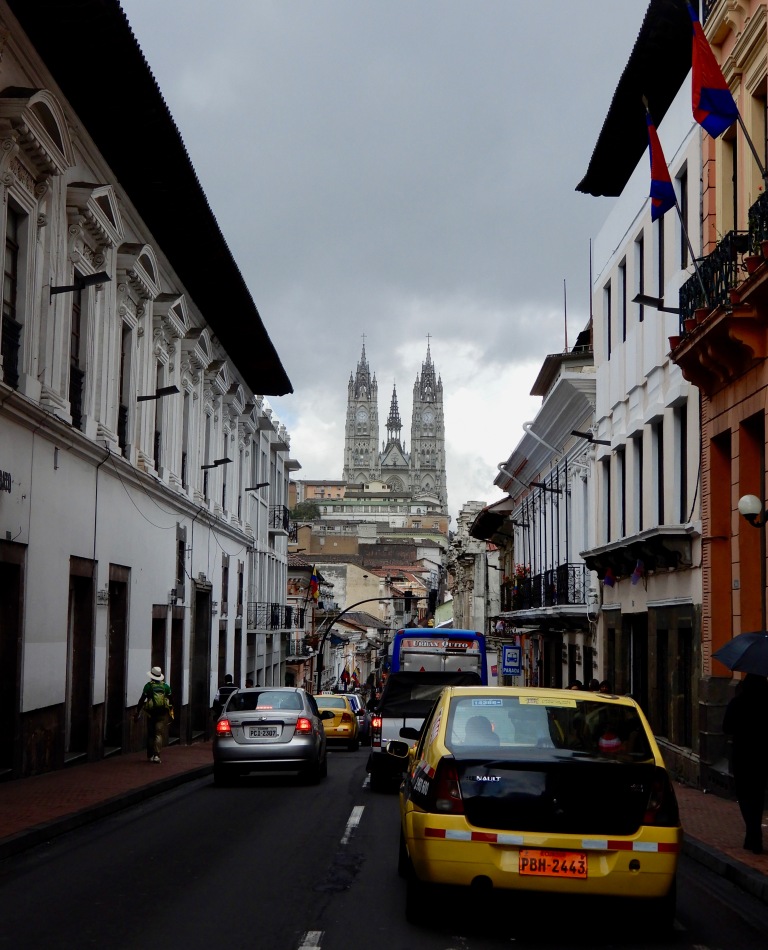 Arriving at night has the disadvantage of dangers, but the advantage of a fluent traffic flow, because of the absent of the typical traffic jams, however congestion is actually the only adequate term for this kind of traffic non-flows.

Especially in the old city centre, where lanes are narrow and most of them steep as well, traffic piles up like ants circling on the hills. A dotted line fills the streets all over, mostly in the morning and evening peak hour, but some streets never get rid of the ants. In order to get traffic flow at least flowing, traffic officers are located on every corner. In absence of well-regulated traffic lights, they are the smartest technology the city has.

To Recycle or not to Recycle

‘Besides quiet, the city is clean as well,’ I continue answering her question. She looks surprised and flattered at the same time, because some weeks ago they had a huge problem with waste collection, resulting in waste piling up in the streets. 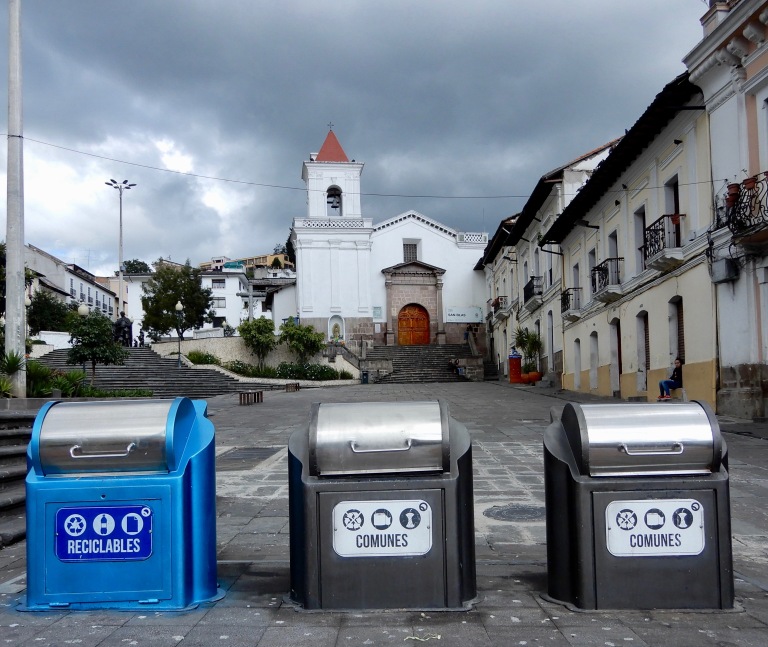 Which surprises me, because every street has at least one huge location to dumb waste, on squares and big streets there might even be two or more. I thought it were recycling points, as they come in groups of four gigantic iron waste collecting pillars, with obviously a huge underground basin. However, the men of the WWF look ironic and surprised when I mention this phenomenon. By no means these are recycling points, they agree both. The waste collecting truck will collect it all, regardless what kind it is.

I am disappointed, because I considered it innovative to have recycling points on every corner, however, that might have been too innovative, hopefully an idea for the future. However, the Mayor did set up an ambitious recycling programme, with special focus on dangerous items, such as batteries, oil, lamps, … There are several collecting points spread around the city mapped on the website of the municipality.

Because here is my main concern when it comes to environmental issues and sustainable development, and once again the slogan of WWF ‘Together, we can,’. Scientists might come up with genius theories, governments might come up with ambitious policies, but if they are not applied by the citizens, the industry and the business sector, they are but a theory and a policy.

And here is where Quito, or even Ecuador, should be ahead of other countries, because the Ecuadorians are the most environmental conscious people compared to other countries in the entire world, even compared to western and northern countries. A clear explanation for this phenomenon isn’t available, however some theories might be found in the cultural heterogeneity, with lots of indigenous people who still have a closer connection to nature, or in the presence of the Galapagos Islands, which are worldwide known, recognized and even protected for their exceptional rich biodiversity, thanks to the heritage of Darwin.

However, this environmental consciousness regarding biodiversity, and species, does not mean that there is a consciousness regarding the sustainable use of resources and climate change. Not at all, unfortunately, admit my interviewees. If one throws a plastic bag in the nature, they don’t see that eventually this bag will end up in the waterflows and later on even in the oceans, contaminating the water and the oceans, and hence endangering the planet.

This is where education comes in. However, no big campaigns or events for the Mayor. The secretariat of environment choses a long-term, gradually approach: ‘The effect of big events disappears together with the event, however daily reminders remember them every day, until it becomes a habit and eventually a culture.’

I don’t see huge billboards in the streets as many other cities have, especially Singapore. What I do see are the waste bins, the small reminders on threes and in parks to take care of nature, but that is about it. The real education takes place in schools, in colleges, even in markets, for those generations that already graduated long times ago.

It reminds me of the story of an old lady in Belgium. She was playing a memory game with her grandson. Both had to mention an item which they would take along on holidays, the next person had to repeat the list of items and add another one, creating an entire chain of items which they had to memorize. After the banal stuff like toothbrushes and bikinis, the grandson added a solar photovoltaic panel and some mirrors. The grandmother was surprised and asked him to explain his choice. ‘Easy,’ he said, ‘the panel can create electricity, and the mirrors can catch more sun, and hence create more electricity if needed.’