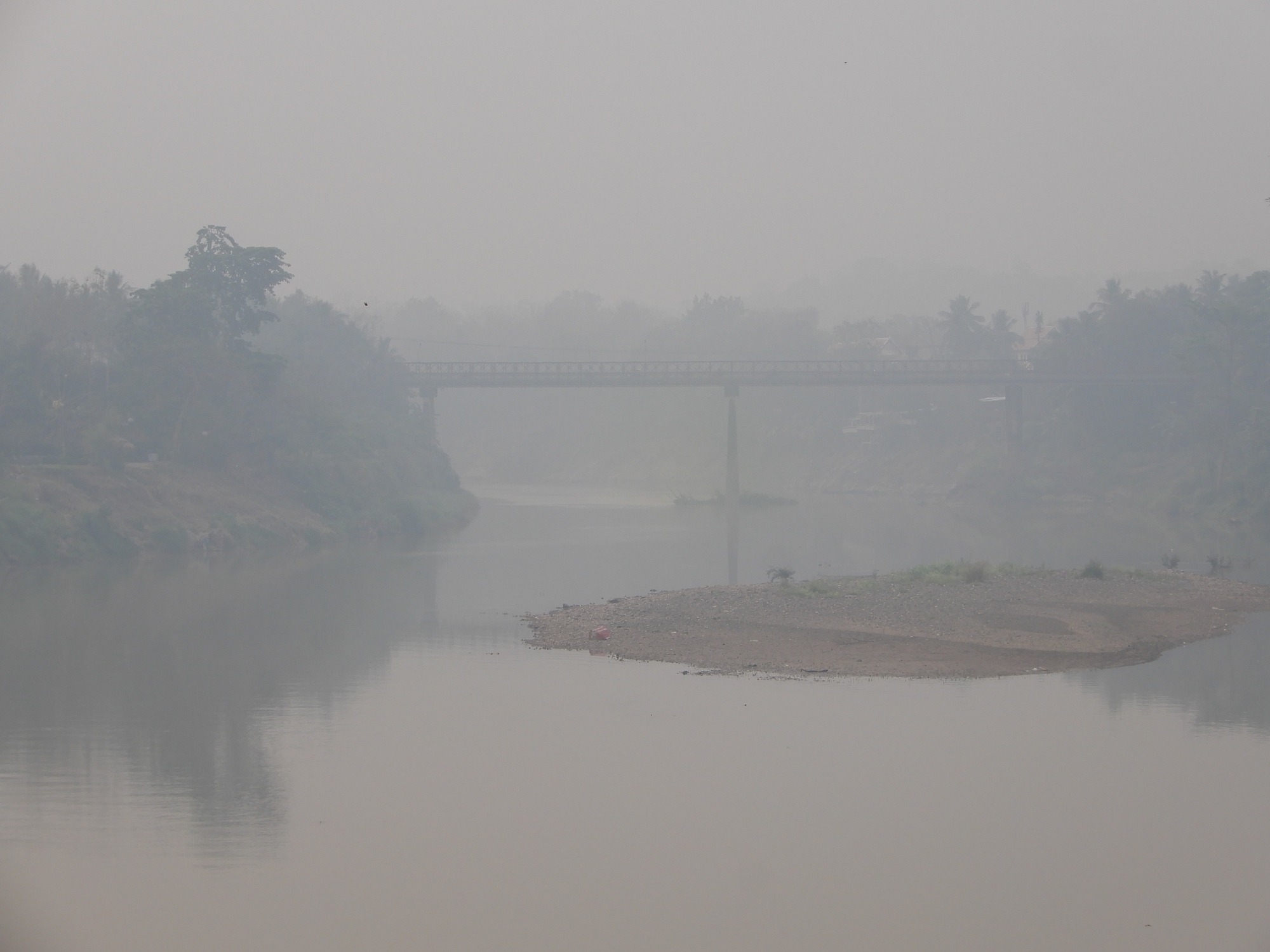 “What is going on here?” is my first thought arriving in Luang Prabang, the colonial city in the North of Laos. It seems like the forest fires on the road only were a prelude on what is about to come.

Smoke hangs over the river and in the streets. I can nearly recognise the city I visited a couple of months ago. Everything is different, it is not only about the heath and the changed season. Yet, it is about the visibility. Where the bamboo bridge was, I can only see a thick layer of smoke, making me wonder if it is still there, the bridge, and even the river.

I hurry up to the other side of Luangprabang, the shore of the Mekong. The same. I can only see this side of the river, for a couple of meters at most. It is all flue, like if someone mixed up with the pixels of the picture.

That night, I walk to my preferred spot along the Mekong to see the sunset, but there is no sun to set, there is no visibility, no bright reflection of the sunlight in the water. Instead, there is a red sun with curling smoke in front of it. The area is burning. Smoke lays over the river. 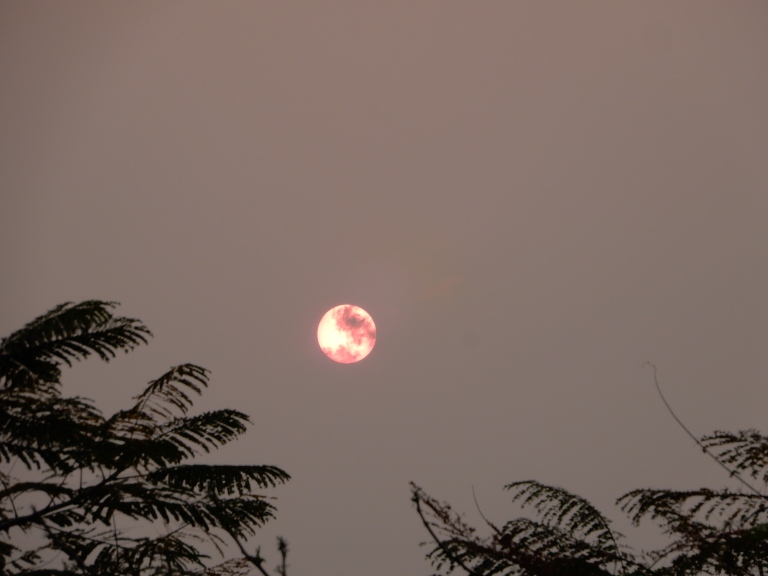 That night I walk home, my eyes and my longs hurt. Although I love this city, I feel like willing to leave. And I can leave, but what about people who live here, how would their longs and eyes feel. And if they don’t feel it anymore, because they are used to it, what would be the long-term impact on their health? Especially on the children and elderly?

It is going on for months now, and not only here in Laos, but as well in the North of Thailand. It is burning season. Which means that old crops and forests are burned to create empty fields for the next agricultural year – right before the rain season takes off.

The Slash and Burn agriculture is the traditional way of doing agriculture here. Forested land is cleared by cutting the trees, after which controlled burning converts the remaining vegetation in a fertile layer of ashes. The rain soaks it in the soil, and the field is ready for the next crops to be planted.

The method is quick and easy, however not sustainable. The farmers will use these fields until the soil is depleted, after which they will burn down other forested land to start all over again.

The depleted fields are left behind to recover. But while a field can be depleted in a couple of years only, it takes many more years for the soil to recover, let alone for an entire forest to grow again.

And if they would leave it deforested, it might still take some 6 years to make it suitable for a next harvest, hence leaving a gap of 5 years in which new forests will be slashed and burned. On average over 400 square miles of forest are slashed and burned in Laos every year. 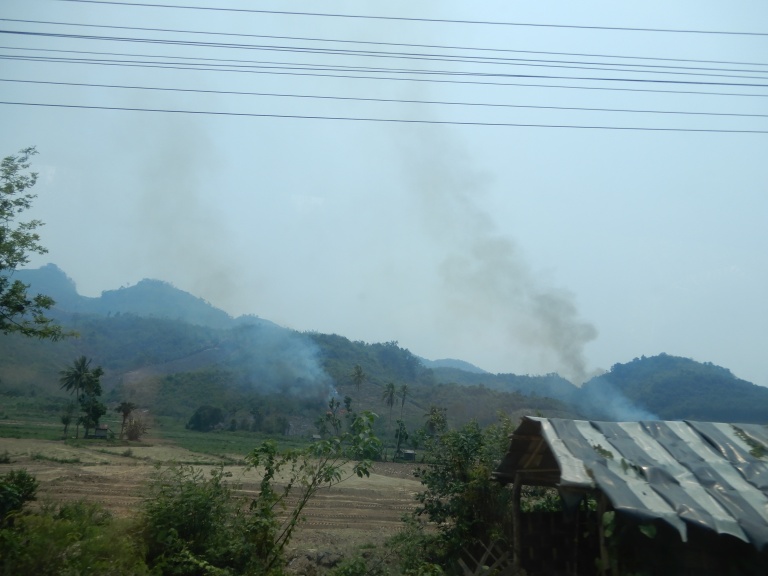 The practice is not sustainable in terms of planet, people and profit. People suffer health issues due to the air pollution caused by burning, traffic dense cities are nothing compared to the layer of smog I see these days covering Luangprabang. In addition, the soil is depleted, eroded, and the forests disappears, including all its fauna and flora.

And we’re not even talking about the green house gas emissions released by this process, the forest fires, and at the same time the reduced amount of forests that would normally serve as carbon sinks.

Add the fact that this practice is done in dry season, hence when the environment is dry and prone to fires anyways. Making the so-called controlled fires prone to become uncontrolled.

In addition to that, there are other reasons people in South-East Asia are burning the forests, some are to hunt animals, others to clear the soil to find mushrooms, and in non-forested areas, farmers set fires to dispose of plant debris after harvesting the crops of last year, such as rice.

Yet, the slash and burn technique is not only used in Laos, when I was in Cambodia I couldn’t make a certain track in the NorthEast in the province of Ratanakiri due to forest fires. While in the North of Thailand the air quality is becoming hazardous for human health with PM2.5 levels between 51 and 194 microgrammes per cubic metre measured in 24 hours-time. Yet, the safe threshold according to Thai rules is about 50, while the limits according to the World Health Organisation are even at 25 over a 24 hours-time span.

What to do about it?

So, what to do about it? First of all, this is the traditional way of agriculture which served the communities for generations, despite its impact on planet, and people. Yet, with the knowledge we have nowadays, it might be a good idea to look for other ways.

In addition, the increasing world population makes this technique really unsustainable in the literal meaning of the word: forests and fields will literally one day all be used and depleted. In addition, not only the number of depleted fields and destroyed forests is accumulating, but so are the numbers of greenhouse gasses.

There should be a more sustainable way of agriculture that matches with the cultural habits as well, and that does not cause other negative side-effects. For instance, keeping the current fields more fertile would avoid the need for clearing new land. However, the fertility techniques should be found in organic and natural ways, rather than in poring chemical fertilizers in the soil which will deplete the soil in the long term as well. Crop variation, variation of fields, organic fertilizers, composting, … there are various ways as long as they are developed by and in cooperation with local farmers.

Hence, altough I don’t like the slashing and burning method, because it is not sustainable in many aspects, I understand it is used, and I understand it will be tough to change, however it might be good to think about an alternative, one that fits cultural practices and does not harm the environment in another way.