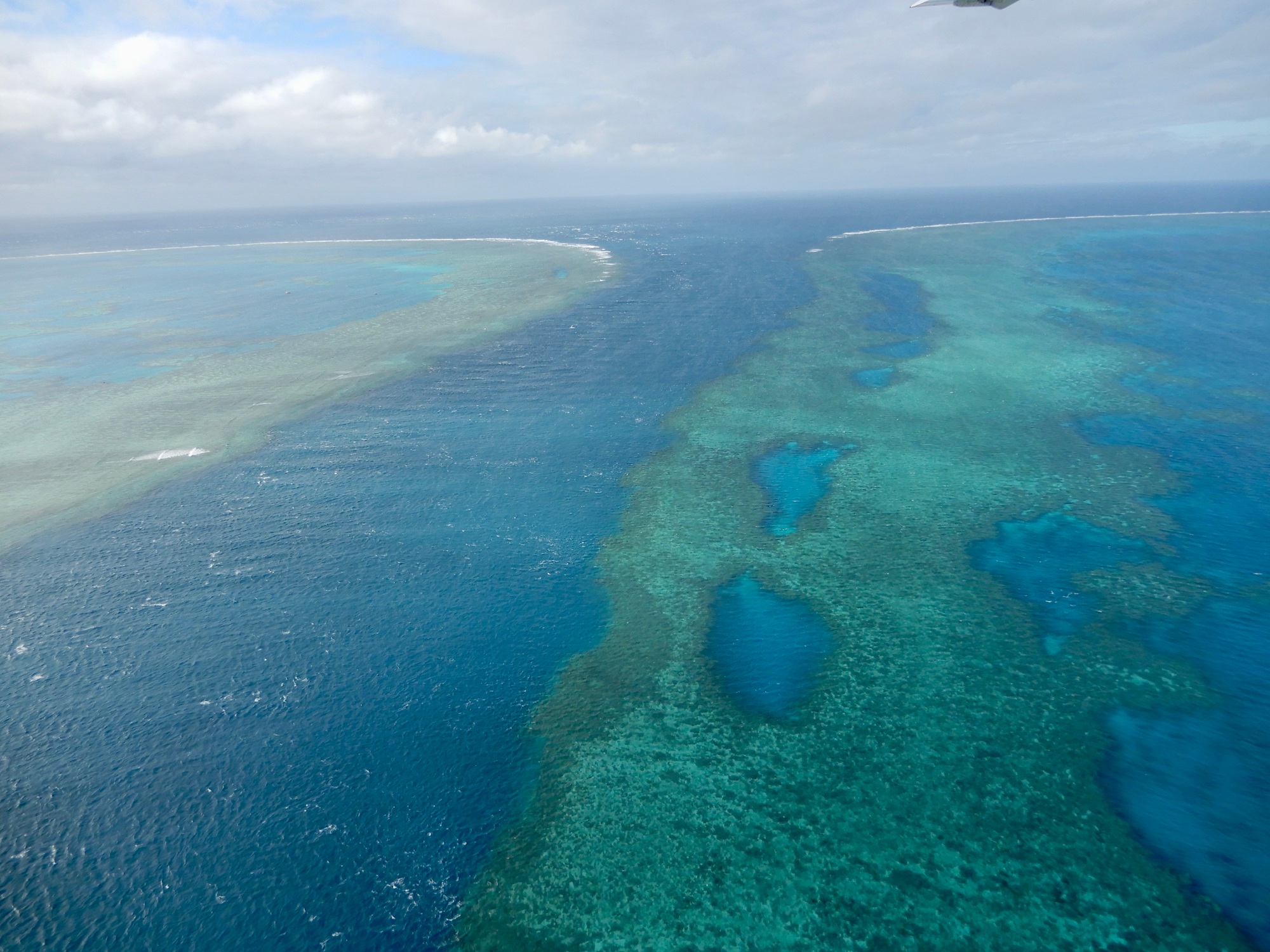 I published this article in the Belgian magazine MO*, for Dutch readers & video check out here.

It is peaceful on the Reef. The water surface rocks tranquil in the dark until the orange-red moon rises at the horizon. A white-orange glow spreads over the water line. Nothing on the surface suggests the event happening right below the black curtain.

Watch out for the Moon

It is the fifth night after the full moon of October. The water temperature is perfect, the night sets in, and there they go. Millions of colourful spores are discharged in the water over the entire surface of the Great Barrier Reef, which is about 344,400 square kilometres large, or about the size of Italy, or Germany.[1]

Only over a couple of nights, at the same time, all corals of the reef release their eggs and sperms. Marine biologists describe it as Christmas, for the larger audience it resembles a snow storm. It is one of the most spectacular events of the Great Barrier Reef, and you have to be fast because it only happens during a few days a year.

Considering the fact that coral like that of the Great Barrier Reef is fixed and cannot move itself, a smart reproduction strategy is necessary to grow and expand. On land, animals can move freely to spread their sperm and eggs, while the seeds of plants are spread out by the wind or by insects.

For an ecosystem on the bottom of the ocean, things might be more complicated, especially since the reef is a symbiotic relationship of plant and animal.

While coral might be rooted on the sea floor; it is actually an animal. Or shall I say they are a colony of animals, called coral polyps. To protect themselves, these small animals create a small layer of calcium around them, which result in the skeleton-like structure.

These polyps cannot make their own food like plants do. Therefore, they catch plankton with their small tentacles, and they live in a symbiotic relationship with algae, the Zooxanthellae.

These algae live in the translucent substance of the polyps where they perform photosynthesis. Thanks to the algae, the coral receives it colourful pallet. In exchange for protection of the polyps, algae feed the coral, produce oxygen, and provide the organic products of photosynthesis, which fuel the growth of the reef.

This smart micro-cooperation on the bottom of the ocean has occurred for the past 25 million years and is the reason why reef structures such as the Great Barrier Reef have become the biggest biologic structures on earth; with some even older than the primary forests.[2]

Who isn’t Strong, must be Smart
So because the corals are rooted to the ocean floor, they cannot visit other polyps to be fertilised. Moreover, predators are always lurking around: coral larvae are a favoured snack for many fish. These larvae are the result of the fusion of a sperm and egg cell. The egg cell (the size of a pinhead), and the even smaller sperm cell, have no defences against predators.

But those who aren’t strong, must be smart. Hence the annual mass-orgy on the reef. Over a few evenings, most coral polyps release their eggs and sperm at the same time. We are talking about millions and millions of cells. This synchronised ejaculation increases the chance of impregnation.

After they have been released, egg cell and sperm cell float to the waters’ surface where they will fuse if they find a compatible ‘partner’. Remarkably, most corals are hermaphrodites, and hence produce both male and female reproduction cells. Some corals reproduce even asexually, resulting in clones rather than unique corals.[3]

From Pinhead to the Great Barrier Reef

After swimming around for a week or so, the larvae – otherwise known as coral planulae – dive to the bottom of the ocean, to find a suitable place to settle. This could be old coral skeletons or other hard surfaces, so long as long as it is solid and has a suitable surface to settle on – one free from algal overgrowth. These must be at the right depth too, so as to get the right amount of light to farm their zooxanthellae.  Therefore, various coral restoration projects to put solid structures on the ocean bottom are designed to provide new areas on which the coral planulae can settle onto, in places where solid structure has been lost.

Within one week, the planula grows and becomes a coral polyp with developed tentacles and commences secreting its own lime-based defence shield. Whole colonies grow from a single polyp. Each polyp divides, cloning itself. As such, the polyp becomes a real polyp colony connected by its common skeleton. Moreover, every time when an old polyp dies, a new polyp will grow over it with its own lime shield. The result: the reef grows, slowly but surely. Some types of coral grow about 5 to 15 cm a year, whereas others grow only a few millimetres. Thus some larger coral colonies can be hundreds of years old.

The timing is an important part of the intelligence of this reproduction process. Even though the process takes a few days, different types of coral release their gametes on different time slots. As such they prevent hybrid types from being formed.

Various factors determine the specific timing, but one thing is sure: the full moon kicks off the spawning event as soon as the water temperatures have matured the reproduction cells of the coral colony’s polyps. Add the colony size, length of the days, the tides, and even the salt level of the water, and you get a complicated cocktail of factors to decide when the mission will take place.

Considering the huge importance of this reproduction ritual for the survival of the reef, and the fragility and complexity of this phenomenon, all factors must be optimal. Therefore, the spawning event happens at night, to reduce the risk of being eaten, even though plankton and other nocturnal marine animals love the planulae as well.[4]

Stressors for the Reef

Unfortunately, the Reef health hasn’t been too good lately. Cyclones, marine heatwaves that lead to coral bleaching, pesticides and fertilisers of adjacent farm land, and outbreaks of the crown-of-thorn-starfish, are the main deathblows for the Reef. The latter one is a kind of thorny starfish – as its name suggests – of which one adult can eat a few square metres of coral a year.

Similar to stressed trees shedding their leaves, stressed coral ejects its colourful algae. The branches of the tree remain, and the bony structure and translucent tissue is all that remains of the coral, as a consequence the coral turns white; it bleaches.

This may not be the end of the story. If the heat stress disappears fast enough, as with trees shedding leaves, coral colonies have a chance to recover. However, if the heat stress remains for too long, both won’t survive.

With only half of the number of corals on the Great Barrier Reef still alive, there are less egg cells and sperm cells to repopulate the reef. “A reduction of the coral cover means less eggs and sperm which can become baby coral, and later on adult coral,” confirms Fiona Merida.

Luckily, there are projects to give the reef a hand. In the Whitsundays in Queensland, the southern gateway to the reef, the Great Barrier Reef faced a number of impacts. In 2017, Tropical Cyclone Debbie destroyed large parts of the reef, with some sites even losing up to 95% of their coral cover. These corals won’t contribute to today’s mass spawning event.[5]

A local tour operator, Ocean Rafting, together with the Southern Cross University and other partners, are helping the reef. A primeur in the Australian history. “The technique was already tested in labs in the Northern Territory in Australia,” says James Unsworth, Master Reef Guide of Ocean Rafting, “but it is the first time we applied the technique in real life. Which is pretty cool!”

After a week continuing their mating dance in the safe but still natural environment within the nets, they were slowly towed back in the sea. Although the nets were installed strategically to capture healthy coral’s spawn; the fused embryos would be released again above damaged locations on the Reef. As such, scientists and tour operators assisted the complex and fragile regeneration process of the reef.

“Our goal is dual,” says James Unsworth, “we want to prevent the spawn from being lost by washing up on the beach and we want to bring it to sites that need extra help to regenerate.”

Today the project happens at a small scale, but once science and technology have been put in place, James has hope for the future. “Hopefully we can upscale this process during the two to three years to come.”

“The Reef can regenerate,” says James, “but the biodiversity of the reef changes with stressors such as bleaching and cyclones. Some massive coral colonies that were hundreds of years old were destroyed by [cyclone] Debbie. Rolled onto the beach like pebbles by the sheer force of the storm. These corals will need hundreds of years to reach that size once again.”

Especially this year the recovery process will be crucial, considering the predicted strong La Niña event, which has a big impact on the ecosystem of the reef. “Due to La Niña, this year’s spawning event started later than last year,” confirms Fiona Merida. “During a La Niña, the winter temperatures are lower than usual, causing the reproductive cells to mature later, and hence the spawning event happened later as well. This year, spawning happened in November and December, whereas last year it was in October and November.”

However, that’s not necessarily a bad thing, underpins Fiona Merida. Even more, scientists hope that the cooler temperatures will prevent new episodes of bleaching this year.

Yet, the flipside of the coin of a La Niña is the increase in rainfall, tropical storms, and cyclones. With the memories of cyclone Debbie still very vivid, and with the reef still in full regeneration, the Whitsundays understand as no other what this means.

Since the spawning event relies so heavily on cues from nature to take place, the changes in climate may place the synchronised spawning off balance. This will decrease the odds that a compatible egg cell and sperm cell will find one another, and they won’t develop into new coral colonies.[6]

On top of that, Australian[7] and American[8] scientists have shown that even coral that survives bleaching events became less fertile.

Therefore, to increase the surviving chances of the reef in a changing climate, scientists of the Australian Institute for Marine Science (AIMS) turn to the intelligent reproduction process of the reef itself.

By collecting and fertilising spawn from reefs located both in warmer and in colder areas on the reef, they are creating variants that would be more heat-resistant than the coral which normally grows in the colder areas of the reef. The goal is to create coral that can deal with both the colder water temperatures that occur naturally, and the warmer water temperatures under expected global warming.[9] However a lot of corals will be needed to manage the 3000 coral reefs.

Other research focuses on getting the algae rather than the coral polyps more heat-resistant.[10]

After all, this is how the Great Barrier Reef, despite being under stress because of climate change, reproduces itself on a still spectacular way. An early Christmas for the scientists, an exceptional snowstorm for all.