‘Today an environmental alert is into force in Santiago, it is forbidden to lighten stoves at home, to help to clean the air of Santiago.” My visit at the Chilean capital will be in the shadow of air pollution and smog, however I’m lucky, because it has rained for the last couple of days.

Arriving today makes me lucky, according to all the people I met on the road, not because of the sun is out again after days of rain, but precisely because of the rain! ‘Climb to the Cerro Christobal or up on the highest building of Latin America, the Torre Centenario, because today you can see the city!” Were the last words I heard of my Cabify driver in Valparaíso and the first words I heard of my Airbnb host in Santiago, no tourist pleasers, but real Chileans, being daily confronted with the alarming air quality of their city. 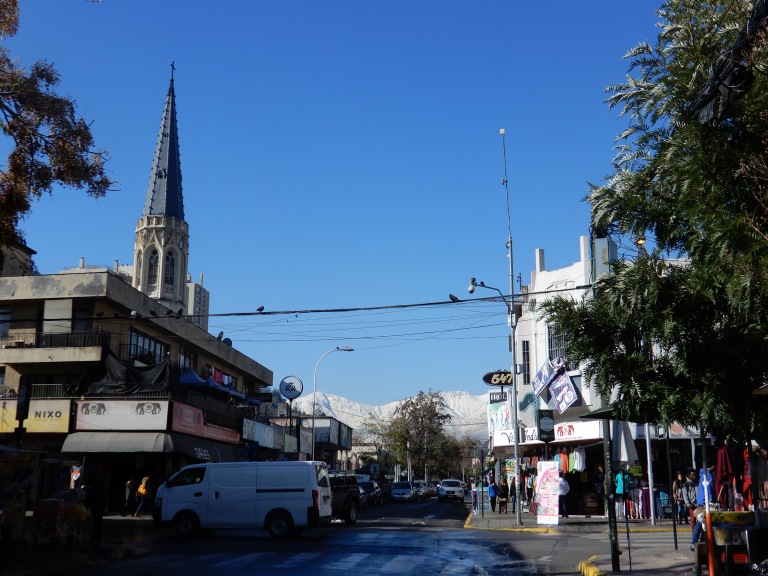 So I climb upon the highest hill in the middle of the city, because the highest mountains are around the city, with the Andes as natural city wall. However this wall is protecting the city for centuries, it might now endanger the city as well, since it holds the air (and hence air pollution) safely inside the city, whereas a city like Valparaíso is located at the coast, where it has the sea breeze to ventilate the city and take the polluted air away.

Up on the gill, the Cerro San Christobal, which is located in the Parque Metropolitano, the biggest city park of Latin America, and gigantic it is! The sporty people can walk, cycle, or even run upon the hill, and on a lazy Sunday you can take a funicular, an old train wagon, pulling the people up the steep hill, and the journey can be continued by a cable car, crossing the entire park, including the not accessible parts.

The view is astonishing, the city looks peaceful and safe surrounded and protected by the snow white mountains of the Andes, however smog is already in the air, making me question how it would have been without some days of rain to clean the air. 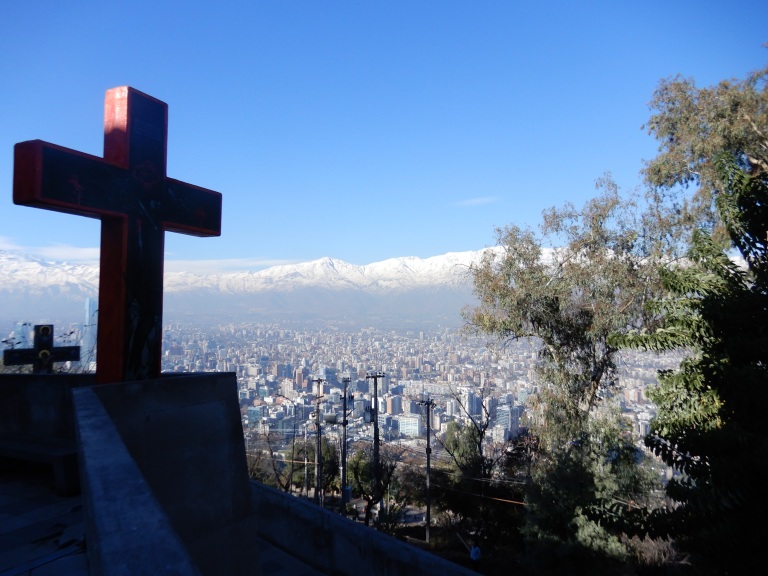 Low and high buildings form an organised mosaic in the rectangle streets, zooming in, the smooth mixture of old colonial and modern capitalist buildings, do remind me a lot of New York City and Washington DC, the same applies for the busy, endless flow of people and traffic.

Walking in the streets, there is the option of the wide sidewalks on the main roads, or the pedestrian lanes crisscrossing the old city centre, recently the city converted even more streets in pedestrian lanes and painted them in colourful patterns to make it the pedestrian as pleasant as possible. It worked out: the city is filled with people, walking, chatting or just enjoying the rare winter sun.

Cyclists obtained their place in the city streets as well. Some streets have separate cycle lanes in the middle of the street, others reserved a part of the main road, painted blue and separated with traffic bumps.

Busses and cars contribute to the layer of smog; both busses and taxis have priority lanes, however there is no priority for clean vehicles. The amount of electric vehicles remains low. And the public transport, except for the subway, the Transantiago, is not electrified neither. However, the Transantiago is an attractive network of public transport, even more because of the convenience of its one card for all busses and metros. Overall transport, he, at some stations you’ll even find bikes to share, however not everywhere.

So, I guess, to clean the air of Santiago probably more has to be done than solely not lighting the fires at home; however, it can be a start, especially considering the bigger particulate matter, PM10, which does come from wood fires, rather than traffic.