Out of Lombok, entering Jakarta is totally different. ‘Now you have forgotten about Lombok, haven’t you?’ he laughs. I have to admit, I have.

I cannot imagine how I was in the morning still sitting in a bamboo hut in the middle of the rice fields, while the volcano Mountain Rinjani was disappearing behind the clouds like he did every morning.

But it all gets really started when we get out of the airport and start heading towards the city of Jakarta. It takes us a 20 to 30 minute-drive, since the airport is a bit out of the centre. ‘even in another province, to spread the wealth,’ he explains me while driving around.

The airport is symbolic for the economic activity of Jakarta which represents a huge part of the GDP of entire Indonesia. With its ten million inhabitants, plus another 1 to 2 million daily commuters who fill up the city with traffic and people congestion during the day. Yet, Jakarta is going to be relocate, the capital is such. ‘We want to spread the wealth,’ he says, because now all wealth is located in the capital which makes that everyone migrates towards the capital.

In a couple of weeks this migration influx will become clear when the Ramadan reaches its end and all people will head home to celebrate with friends and family. It will be empty he laughs.

Yet, Jakarta is known to will be replaced for other reasons but spreading the wealth and traffic congestion, and the high number of people.

Jakarta is prone to flooding. Both because of the rising sea level and because of ground water drilling. ‘Yet this year we are lucky,’ he says, ‘There are not a lot of floods in North, which is the most vulnerable zone, since it is the lowest one. But the south has a lot of floods.’ He is from the Centre but lives now in the North. Lucky him, I think.

Yet, he has no explanation why this year things go well, and I have read a lot of articles that there was some flooding the last couple of weeks. But I don’t interrupt him. In addition, his explanation for the flooding has nothing to do with rising sea level. Yet with mismanagement of the water resources of the city. Waste builds up in the water runaways, and canals are built over, resulting in no possibility for the rainwater to leave the city. In addition with the lower position, lower than sea level, the water cannot run into the sea and stays in the city. Hence: flooding. 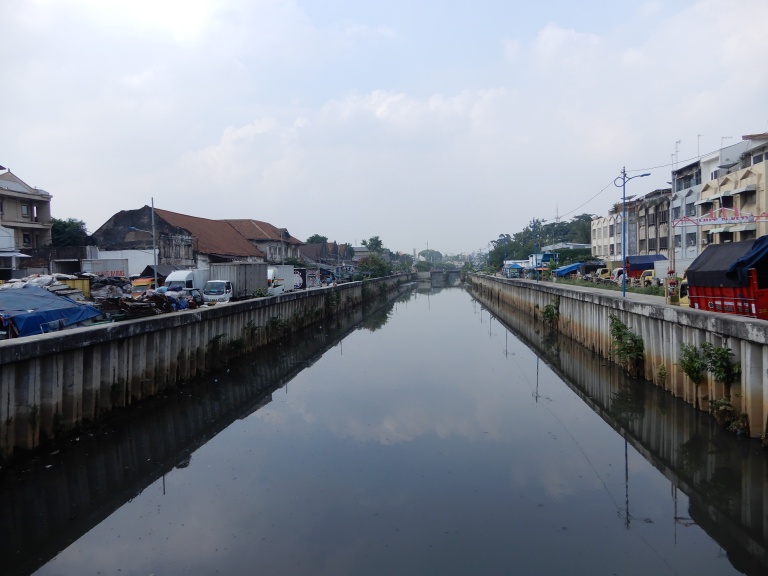 One must know as well that the water in Jakarta is of considerable quality, all the canals and rivers I have seen are really disgusting, they don’t only look disgusting with a thick layer of greasy mud on top of it, maybe oil? But they smell bad as well. The other day I will be walking through a slum located around one of the channels and I’m not sure what is the worse: the housing quality of the permanent smell of the water in your backyard.

The smell is by the way the first thing I really notice of Jakarta. When we leave the province of the airport and pay the toll fee to enter the city, he opens his window and the smell comes in. ‘Welcome in Jakarta,’ he says while he laughs. A terrible smell of rotten material fills the car. I know the smell from when I was a kid and we had open sewage systems, because in our street there were no water pipes yet.

Jakarta is built on a swamp, so wherever you go, all water sources are related to the swamp, which is in part as well an explanation why the city is sinking. Unstable soil in combination with a thousand of pits for ground water drilling, makes the city sink like a flan.

Yet, we continue the road. This time there are four roads in each direction. Two upper and two lower located. ‘The lower roads used to be flooded all the time, so the government constructed higher roads aside of it. So if they flood, traffic isn’t jammed.’ He explains me. Looks like a smart system, although I wonder if it is a real sustainable solution in the long term and if they should start elevating the entire city this way, since it is known that by 2050 95% of Jakarta will be sunken of no appropriate action is taken.

The sunset colours the sky gold, while the skyscrapers rise at the horizon. I feel back in New York, this is by no means what I had in mind of Jakarta. Again, he reminds me of how far away my memories of Lombok are by now. They are far away.