The road continues towards Jakarta. He says we are lucky, because people started eating – it is Ramadan and we pass the time allowed to eat again – so the roads are empty.

We are lucky as well that he can enter the city, because today the odd numbers can enter, his number plate, and tomorrow the even numbers can. So at least only half of the vehicles go in.

Before they had another system, which allowed only cars with 3 people at least in to enter the city. ‘But many people walked to the city and waited on the highway for other cars to pick them up and bring them in the city, of course they would pay for the service,’ he laughs when he thinks of the system. It stopped. Nowadays they have the number rule. 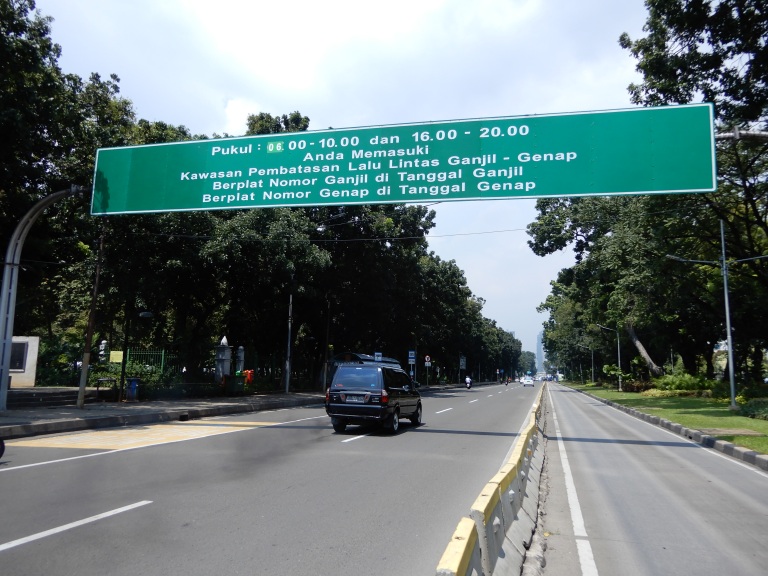 Hit or be hit

I ask about other transportation modes, such as cycling. He laughs out loud. ‘Cycling is not an option, whether you will hit someone, whether you will be hit by someone,’ he laughs. When I’m the next day walking through the city, I can only imagine how I – as a pedestrian – am in the position to be hit. I will definitely not hit anyone else, and chances are really high that I will be hit. Hence, I have to return and will not reached my planned destination. There are no sidewalks, traffic goes chaotically in both direction on narrow streets, while scooters pass cars by both sides. Suicide mission, mission impossible.

While walking and cycling is a no go, as he explains in the car, the public transportation is a hit. We just pass the new metro station, which is there since a couple of months only. The white stations look modern and brand new and are proudly at the side of the highway.

AT the other side of the road, in the middle of both driving directions actually, are the separated bus lanes. This system allows them to stay out of traffic congestion and increase the safety of bus drivers and riders. ‘Brand new as well,’ he says proudly, ‘the system is constructed like about 5 years ago, and the busses can stay out of traffic thanks to the separated lanes.’ It looks like the Transmilenio in Bogota, Colombia, but a bit cleaner since these busses don’t leave behind a huge trace of black smoke. They are more recent, for sure, yet not electric or hydrogen-based. 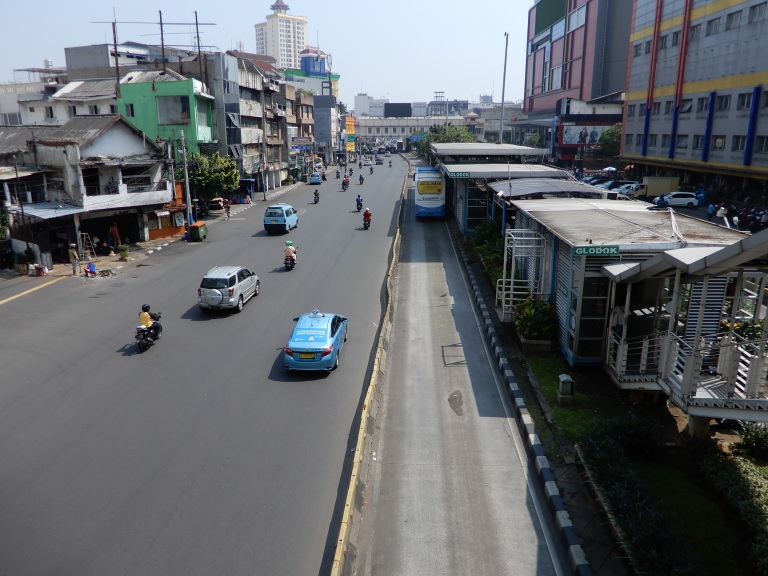 That is another story. Biofuel and palm oil. ‘Deforestation in Indonesia is terrible,’ he says regretful. ‘it is one of the worse countries in the world. Because of palm oil and logging. Wood production. Many forests are cut to replace it by palm oil. But what will happen with the animals, entire ecosystems are destroyed. And what will happen with the food?’ He is visibly worried about the topic. ‘But it is a bit changing now. The government tried to lower the palm oil for export, because the European Union no longer wants palm oil. And we start using it now for biofuel, by blending 30% palm oil with other fuel.’

‘But the deforestation keeps going. Something has to change. The monkeys are losing their houses, …’ I suggest politics?

But there is a. lot of corruption still. ‘It is part of our blood,’ he says laughing. ‘There is corruption everywhere. They could do a lot of good projects. We pay a lot of taxes in Jakarta, but because of corruption they don’t.