This blog is part of the series ‘What the resilience of the Whitsundays can teach the world at the beginning of the hurricane season.’

On which I published a long-read in Dutch as well.

The passage of cyclone Debbie as described in previous post caused damage to man and nature, one of the main suffering structures was the reef (the Central part of the Great Barrier Reef). Yet, its resilience and saviour abilities are inspiring.

Damage to the Reef

While various houses, hotels and tourism businesses had seen severe damage, nature was at the frontline as well. After cyclone Debbie, Dr. David Williamson of the James Cook University recorded a 50% decline in live hard coral cover at the 42 monitoring sites of the University. Yet, the coral loss appeared in patches, with some parts remained untouched by the cyclone, whereas others has lost nearly 100% of its coral cover.

As cyclone Yasi in 2011 has shown, the reef has the capacity to recover, if it has sufficient time and no other stressors such as climate change (resulting in bleaching and ocean acidification), crown-of-thorns starfish invasions, and water pollution such as nitrates and phosphates of agriculture, which are among the major treats.

Cyclone Yasi had brought the coral cover in the Central Great Barrier Reef to its lowest point in history. Yet, research of the AIMS (Australian Institute for Marine Science) showed that hard coral rapidly after recovered; even to the highest average regional cover in 2016, covering 22%.

Still, the impact of all these stressors is local, causing that at the same spot a part of the coral can be totally died-off, while ‘around the corner’ coral is still colourful and vivid. The AIMS’ reef monitor shows how some outer-shelf reefs offshore from the Whitsundays has even small annual increases in hard coral cover and retained moderate to high hard coral cover despite Debbie, whereas inshore and mid-shelf reefs were more severely impact, resulting in lower hard coral cover.

The AIMS concluded that decades of monitoring show the resilience and ability to recover of the Great Barrier Reef, yet within certain limits. The institution warns for the predicted consequences of climate change, which will bring not only more mass coral bleaching events, but more powerful storms as well; both resulting in more damage for the reef and less recovery time.

The same lesson was made out of monitoring the reef 10 years after cyclone Hamish (2009) passed, where the AIMS noticed that the reef is recovering, yet within the rising new stressors, the recover ability of the reef is heavily challenged. 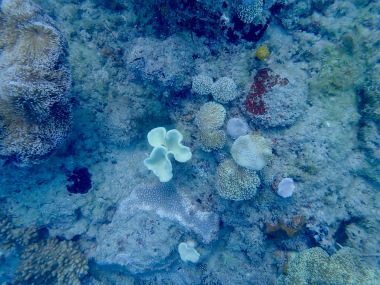 The facts are that the reef is partly recovering, and that it has overcome cyclones in the past. Yet at the same time, the reef needs time to recover, so we have to limit additional stressors such as global warming as much as possible, to allow it to accomplish its natural cycle of life and death.

Willing to know why the reef really matters to us? Read the next blog post!