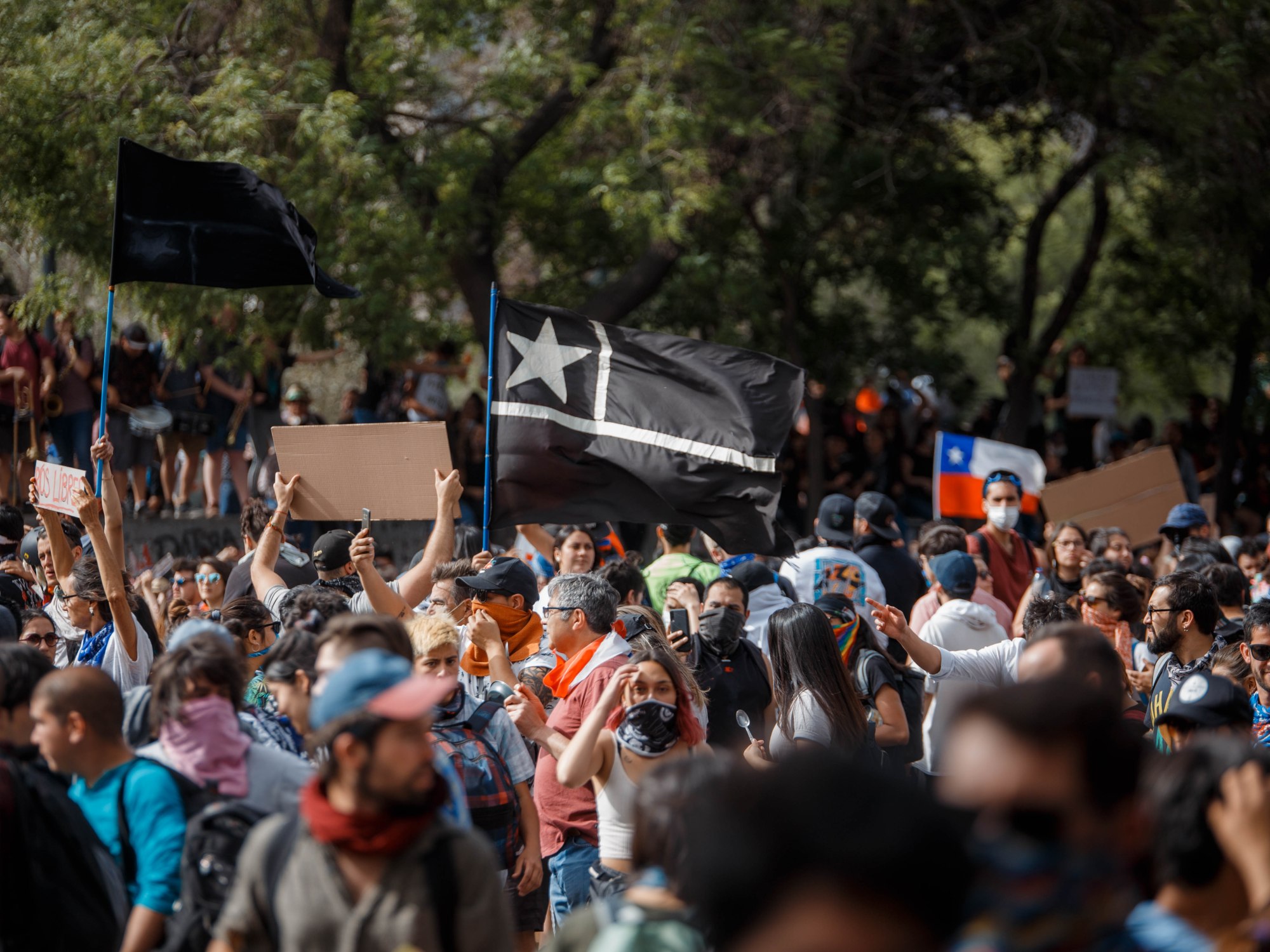 Disclaimer: all pictures are from Matias Marin Rojas. With thanks to his bravery and photography to capture in images what is happening in the streets of Chile.

‘Worse than the dictatorship of Pinochet,’ says Juan after calling his father in Iquique, Chile. In only a week, the assumed most economically stabile country of Latin America changed into a war zone according to President Piñera. ‘But there is no war,’ says Paula, ‘This are armed militaries against unarmed civilians.’ The young Chileans testify how their compatriots ended up in this situation. ‘The situation has been exploded!’

‘This cannot be. This cannot be,’ sounds the desperate witness of an execution during daylight. Not of a criminal in a medieval courthouse, yet of a young marcher, laying defenseless on a street of Santiago de Chile. While the witness records the atrocity with her phone, the despair in her voice increases. ‘This cannot be.’ In front of her eyes and without defence, the youngster is shot down by a soldier.

A fast recapitulation. One week ago, president Piñera increased the fees of the subway in the capital Santiago de Chile. Out of protest, masses of students started riding the metro without paying. The Minister of the Interior reacted by enacting the Law of Security of the State to re-establish the order. Hence, demonstrators feel like the government does not listen.

As a result, the manifestations continue. Yet, they derail due to some delinquent people who mingle amongst the initially pacific demonstrators. They start burning down subway stations and ruining public spaces. The government reacts again with more repression, this time they send the army in the streets. The result: various deaths and wounded; yet formal and informal statistics vary.

The outrage continues, because the Chileans still feel as the government does not listen. Eventually, president PIñera apologies for decennia of mismanagement and promises restructuration. Yet. the rage continues and spreads out over the country and over various generations. The fire has just been lighted.

‘People are tiered,’ says Paula, a 27-year old teacher of Chile. Increasing the fees of the subway was the trigger, yet the real reasons of the manifestations are rooted in the past decennia of Chile. In the economic injustice and inequality. ‘It is not about the 30 pesos we will have to pay more,’ says Juan, a 24-year old Chilean. ‘It is about so much more.’

Yet, the government reacts with disproportionate violence. Jose, 28-year old publicists out of Santiago, tells how a friend of him was shot in the shoulder during a manifestation. ‘After the march has ended, my friends were walking home,’ he starts. ‘They wanted to be home before curfew set in. While saying goodbye, and walking away of the protestors, soldiers started shooting on them. Out of the blue. Without reason. Precisely because they were doing nothing wrong while they got shot, their parents’ stories about the military dictatorship resurrected in their memories. As if they revived their parents’ history.’ José’s friend got shot in the shoulder, wounded but survived. ‘There is so much abuse,’ he says sadly.

The other Chileans confirm. ‘The soldiers think they are in war, but this is no war, they are fighting their own people, not an armed army,’ says Paula. President Piñera dismissed the increasement of the subway fees, but it cannot temper the rage of the Chileans. ‘The increasement off the fees was the straw that broke the camel’s back,’ says Juan, ‘It was the trigger, not the cause.’

De outrage continues because the causes are rooted way deeper than the subway fees. ‘There is so much inequality,’ says the 27-year old Chilean Enrique. More than a quarter of the wealth of the country is owned by only 1% of the population, according to the report ‘Panorama Social de America Latina’ of the Comisión Económica para América Latina y el Caribe (Cepal).

The oasis where president Piñera talked about before does only apply tot he lucky few – wealthy – people in the country. According tot he Organización para la Cooperación y el Desarrollo Económico (OCDE)), there is a huge gap between the 10% most wealthy and the 10% less wealthy people in the country. One third of the Chileans does not have a fixed or official job, while one on two Chileans is low-literate.

In addition, the Chilean public transport is already one of the most expensive systems compared to the salaries. A less wealthy family spends about one third of their income to transport solely.

Life is disproportionate expensive in Chile for the majority of the people. Not only public transport, but education, health care, water, electricity and other primary services. While the privatised services are extremely expensive, the public services are of extreme low quality. ‘As in other countries you die of cancer here,’ says José, ‘yet with that difference that in Chile you’ll die faster. ‘The waiting lists are as long that people die while waiting for their surgery,’ confirms Paula.

A lot of students cannot afford studying in Chile, so they are forced to study abroad. Not only students and the working population are economically suffering, so are the retired ones. ‘They must survive on a wage that is half of the minimum wage sometimes,’ explains Paula, ‘therefore, they are forced to continue working.’

Hence, while the sudden rise of the Chileans might be surprising for outsiders, for them it is the logic consequence of the events of the last years. ‘The manifestations against the increasing subway fees are but the tip of the ice rock,’ says the 24-year old Valeria, ‘Below are various issues for which we demand more justice and economic equality such as education, health care, the retirement system, etc.’

‘Previous generations might have been afraid to take the streets, due to their experiences with the military dictatorship, such as tortures, disappearing, and murders,’ says Paula. ‘But my generation does dare to take the streets. Moreover, our youngsters don’t have anything to lose. We see our parents working hard, but not earning anything. Life is extreme expensive in Chile. So we cannot do anything else than taking the streets.’

In 2006 and 2011 the students already took the streets in pacific marches against the privatising of education and other economic injustices and inequalities in the country. ‘But we did not achieve any change. Nothing,’ says Paula. ‘The government sends soldiers in the streets to scare of us, which works for the previous generations who’ve been in the military dictatorship, but not to us.’

Yet, this time the marches are different, explains José. ‘Normally the younger generations take the streets, but this time all the generations are out there. We all fight for the same cause. It has been enough. If it does not happen now, it never will.’

In the meantime, president Piñera has admit that his country does not respond t the social needs of the population, yet he blames the previous government for it. ‘It is true that the problems are accumulating over the past decades, and that the previous governments were not able to understand the severity of the situation.’ After which he announced some social restructuration,

‘Nothing!’ says José, ‘He does not propose anything in specific. I understand you cannot change something in one day if you haven’t done it in the past 3 decades. The government promises they will work on it, yet they don’t say how.’

Various Chileans complain about the same problem: ‘It is absurd that we are still using the same constitution as during the military dictatorship. If the constitution does not change, there cannot be a real democracy,’ says José. ‘We demand this change for years, but they never discuss it. Neither now. Yet, it is precisely this law and these lawmakers that maintain the current neoliberal system which has resulted in the far-reaching privatisations, resulting in the current inequality we have.’

The apologies of the president are not taken seriously either. ‘If he really would have been sorry, he would have changed things way earlier.’

President Piñera still has two more years to govern, since he was elected in 2017 for the time of 2018 to 2022. Yet, it sounds vain to hear him blaming the previous governments for not having done enough, since he was one of them. When he was president of Chile from 2010 to 2014, as well as the past two years, he did not make any profound change either.

It remains unclear how the situation will evolve. The protestors demand far-reaching social restructuration; ‘We want to change the entire paradigm of Chile,’ says Paula, ‘A social system instead of the extreme privatisation nowadays.’ What will be the next answer of Piñera remains unclear either. ‘We need structural changes,’ confirms José, ‘And I hope they are about to happen now.’ Ojala